In the history of MLB there has only been (so far) four Grandfather-Father-Son combinations: the Boones, Bells, Hairstons, and the Colemans. These posts depict my collection of baseball cards that represent these baseball royalty families.
The Boones.
Ray Boone was an infielder from 1948 - 1960. He had over 80 RBIs five times, topping at an AL-leading 116 in 1955 for Detroit. In his career, he hit .275 with 151 home runs and 737 RBI in 1373 games for Cleveland, Detroit, Chicago White Sox, Kansas City Athletics, Milwaukee Braves, and the Boston Red Sox. He was a two-time All-Star.
Ray Boone was followed into the majors by son, Bob Boone, who was a catcher from 1972 to 1990, and grandsons Bret Boone, who played from 1992 to 2005, and Aaron Boone, who played 1997 to 2009. Another brother Matthew, was drafted by the Detroit Tigers and played in the minor leagues for seven seasons. The Boone family was the first to send three generations of players to the All-Star Game (all four were All-Stars). Recently, the Washington Nationals selected Ray's great-grandson, Jake (Bret's son) in the 2017 draft, possibly making the Boone family the first to produce four generations of players.


Bob Boone played in the majors for 19 years and was a four-time All-Star. He also managed the Kansas City Royals from 1995-1997 and the Cincinnati Reds from 2001-2003. While Bob Boone never had excellent hitting numbers, he was a regarded as a phenomenal defensive catcher, committing only eight errors and allowing only three passed balls in 132 games during the 1977 season.
In 14 major-league seasons, Bob's oldest son Bret was a three-time All-Star, four-time Gold Glove winner, and two-time Silver Slugger Award winner. Bret's best season was 2001 when he had 118 runs, 206 hits, 37 HRs, 141 RBIs, and a .331 batting average while playing for the Mariners.


Aaron played 12 seasons in the majors with six teams, but forever won the hearts of Bronx Bomber fans with his epic Oct. 16, 2003, pennant-winning home run against the Red Sox. He is the current manager for the New York Yankees. Aaron's best season was his All-Star year of 2003 when he hit 24 HRs and 96 RBIs combined with the Reds (106 games) and Yankees (54 games).
Reportedly, the Boone's are descendants of American pioneer Daniel Boone. 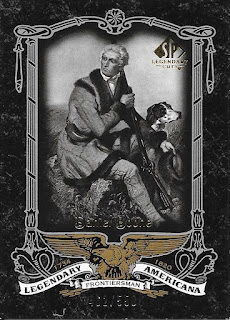 2007 Upper Deck SP Legendary Cuts Daniel Boone Legendary Americana Frontiersman card #LA-36
no. 462/550.
There you have it - the Boone baseball family as shown in cards. I hope you liked it.
Be well,
CinciCuse Bill