Jefferson Burdick is regarded as the father of baseball card collecting. His entire collection of over 300,000 items dating from the 1860s to 1963 were donated to The Metropolitan Museum of Art. A major part of his gift is one of the largest collections of baseball cards now held by any public institution. In the process, Burdick devised a cataloging system and published the American Card Catalog. The "bible" is still the most important reference guide to collecting baseball and all types of cards.

Burdick (1900–1963) suffered from severe arthritis so bad that, according to Sean Kirst, author of  "The Ashes of Lou Gehrig and Other Baseball Essays" Burdick couldn't open his mouth wide enough to put in a ball of hard candy, and that he often struggled to lift his arms off of a table. Kirst writes that Burdick "...had no direct survivors. That may explain Burdick's decision, late in life, against selling his collection. Burdick chose instead to leave a gift for all his descendants. They include anyone who ever kept a card-filled shoebox in the closet, anyone who knows the sheer joy of filling out a baseball checklist. Burdick died in obscurity, with millions of heirs."

Jefferson Burdick was from Syracuse, N.Y. where he worked as a parts assembler for Crouse-Hinds. 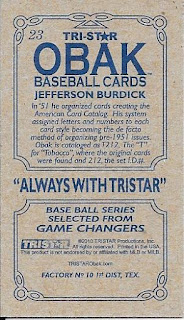 In 1960 Burdick wrote that a card collection is "a magic carpet that takes you away from work-a-day cares to havens of relaxing quietude where you can relive the pleasures and adventures of a past day—brought to life in vivid picture and prose."

How true that is

The America Card Catalog first edition was in 1939, with revised editions appearing through 1960. 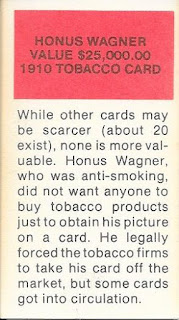