Cincinnati Reds Hall of Famer Jim Maloney was one of the biggest pitching stars of the 1960s, winning 20 games twice and 134 overall in his career. His forte was the strikeout: he ranks #25 on the all-time list for strikeouts per nine innings. He was known as one of the hardest throwers of his time.

Maloney threw two no-hitters, both while with the Reds. The first, on August 19, 1965 at Wrigley Field against the Chicago Cubs, was a 10-inning affair. Despite not allowing a hit, Maloney was in trouble most of the game because he walked 10 batters while striking out 12.

The second was on April 30, 1969 against the Houston Astros at Crosley Field. Maloney only walked five (and struck out 13). His glory was short-lived, however. The next day, the Astros' Don Wilson no-hit the Reds. It was Wilson's second career no-hitter.

He had a third one: on June 14, 1965, Maloney pitched 10 no-hit innings against the New York Mets before allowing a lead-off homer to Johnny Lewis in the 11th and ending up a 1-0 loser. He tied a NL record with 18 strikeouts in an extra-inning game while walking only one that day. However, MLB’s Committee for Statistical Accuracy amended its definition of a no-hitter in 1991, and Maloney is no longer had credit for the gem.

Maloney also had five one-hitters in his ML career. 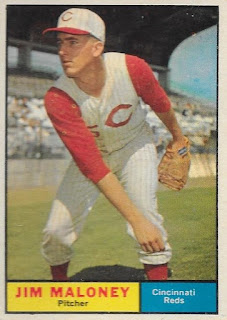 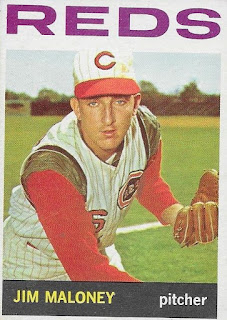 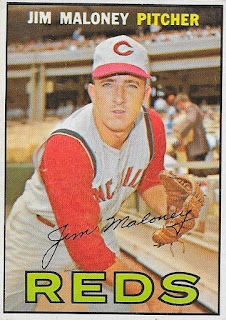 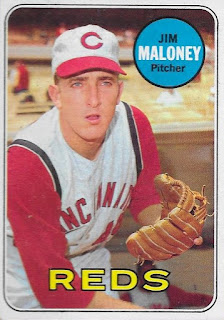 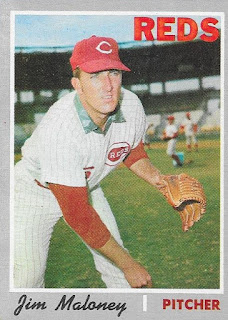 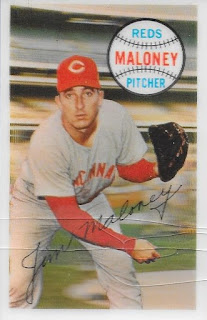 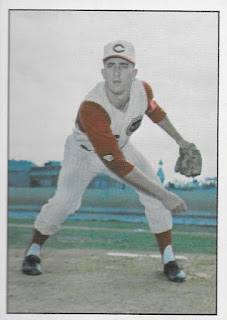 1978 TCMA #10.
It's interesting, and coincidental, that each of the 7 cards shown above show Maloney posing in his pitching follow-through motion. 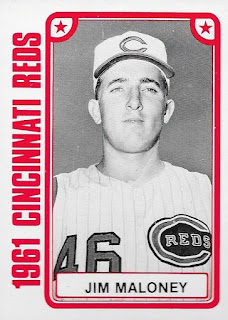 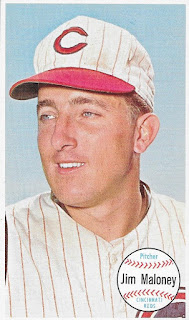 1964 Topps Giants #34.
Maloney had an impressive career, winning 134 and losing just 84 games, striking out 1,605 batters in 1,849 innings, tossing two no-hitters, five one-hitters, 30 shutouts, and compiling a 3.19 ERA. He had great success against Willie Mays, holding him to a .172 batting average in 66 at bats, Billy Williams (.185 in 95 AB), and Ernie Banks (.216 in 96 AB).
In his second start of the 1970 season, Maloney severed his Achilles tendon while running the bases. He never fully recovered from his injury, keeping him from ever returning to form. The injury effectively ended his career, as he sported a 134-80 record, 3.08 ERA, and two no-hitters prior to 1970 and a 0-4 record with a 7.28 ERA in 1970 and 1971, spending that final season with the California Angels.
Teammate Johnny Bench not only caught Maloney, Mario Soto, and Tom Seaver, but in All-Star Games he caught other great fastball pitchers such as Don Drysdale, Bob Gibson, and Steve Carlton. Bench said Maloney threw harder than anyone he ever caught.
My favorite card from this post: I love his 1961 Topps rookie card.
What's yours?
Thanks for visiting.
CinciCuse Bill