One of the things I like to do to pass time is click on the players featured on the opening page of Baseball-Reference. Frank Corridon was featured recently, and when I opened up his page I noticed that he had died and was buried in Syracuse, NY, so I looked closer and learned that he may be the inventor of the spitball.

According to Baseball-Reference (B-R Bullpen), a "letter from pitcher (and later umpire) George Hildebrand indicates that Hildebrand was with the Providence Grays in 1902 and learned about the spitball from Corridon. He and Corridon experimented together as to the best amount of wetness. At the time, such a pitch was not illegal. When Hildebrand came to the majors, he taught it to others, who in turn taught it to others, and the rest is history."

In the early 1920s, the Corridon family moved to Syracuse where Frank worked and coached the Central High School baseball team. Corridon died in Syracuse on February 21, 1941, at age 60. He was interred at St. Mary’s Cemetery in the adjoining town of DeWitt, New York.

National Baseball Hall of Famer (Pioneer/Executive) Candy Cummings is credited with being the first pitcher to throw a curveball. According to Baseball-Reference (B-R Bullpen), Cummings became interested in the curve ball around 1863, At one time, he was the best and most famous pitcher in the country as an amateur. He was instrumental in changing the role of the pitcher from someone who simply delivered the ball for batters to hit, to a player who could limit their hitting by way of his own skill.
Cummings attended a boarding school in Fulton, NY, a Syracuse suburb. In 1877 he pitched for the Cincinnati Reds. 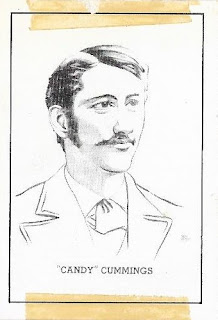